Charlemagne King of the Franks 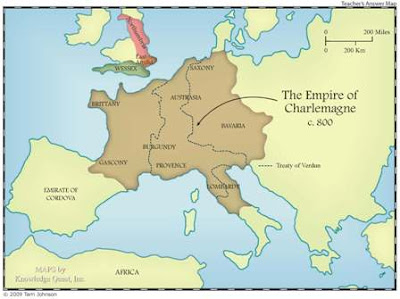 He ruled the areas of France and Norther Europe from 800-814. In his life time he had at least 4 wives and several mistresses and about 20 children.

On the surface this sound like a big, exciting and prestigious person to have as an ancestor. He was a king and a powerful one. He united most of Europe under his command, not a small feat.

Before anyone gets very excited you have to understand that most people of European descendant are related to Charlemagne.
How can that happen, you may ask?

Go to the following link to read an interesting article about our common ancestors.

http://phenomena.nationalgeographic.com/2013/05/07/charlemagnes-dna-and-our-universal-royalty/
Posted by Lee at 3:40 PM