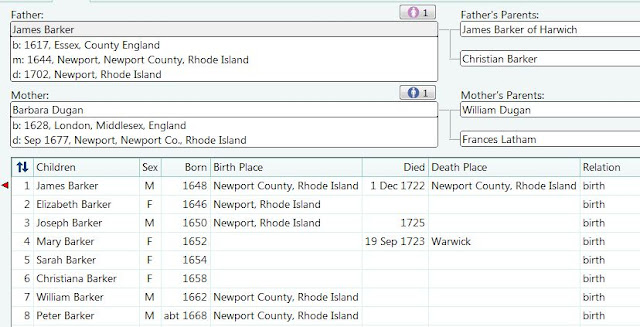 James Barker (1623 - 1702)[1] was a deputy governor of the Colony of Rhode Island and Providence Plantations. He sailed from England with his father, also named James Barker, who died during the voyage. Also on the same ship was future Rhode Island Governor Nicholas Easton. Barker was put under the care of his aunt, Christianna Beecher, who later married Easton, bringing her and Barker with him to Newport.[1]

Barker was active in the civil affairs of the colony during much of his adult life, undertaking positions as commissioner, assistant, and deputy over a period of many years.[1] In the Royal Charter of 1663, which became the basis for Rhode Island's government for nearly two centuries, Barker was named as one of the ten Assistants to the Governor. In 1676, during King Philip's War, it was voted that the advice of the most judicious inhabitants of the colony be obtained, and that these people sit at the next session of the assembly.

Barker was one of the 16 men whose counsel was sought in this request.[1] In 1678 he was elected as Deputy Governor, serving under governors Benedict Arnold, William Coddington, and John Cranston, the first two both dying in office in 1678.

He was a Baptist minister, assisting in the ordination of Rev. Richard Dingley in 1690.[1] His wife was Barbara Dungan, the oldest daughter of Frances Dungan and her husband William.[1]